This post is part of the FAIR and CTI related blog posts; an event back in January made me want to add this to the mix.

That gave me pause because I went to a DoD-backed program in Undergrad, and we learned multiple Intelligence Processes/Models. I covered them in most of my Threat intelligence presentations and when I was teaching at the same DoD-backed program after I got my master’s degrees. Even after walking through the three, I knew the best; the person I was talking to didn’t know what I was talking about.

So, as I said, I thought I’d go through them into here, for people that haven’t been exposed to them yet. I’ve always figured people reading my blog would be familiar with at least a couple of the models.

END_OF_DOCUMENT_TOKEN_TO_BE_REPLACED

Back in December, it really doesn’t feel that long ago, I talked about how I was prepping for a project.

The end goal is to brush up on Network Security Monitoring (NSM) and use it to better monitor my home network. I occasionally check the logs but think I would be more active if I had a centralized tool to help. Right now, I have a log of blocked domain alerts in my PFSense Firewall’s PFBlocker-NG reports screen. Most of the entries are tracking related that the Pi-Hole isn’t blocking and is getting to the second block list on the firewall.

Note: I say my home network, not my home lab. As I said in the past, I no longer maintain a home lab due to cost and space. I have parts of my network isolated, but I wouldn’t call that a lab.

END_OF_DOCUMENT_TOKEN_TO_BE_REPLACED

This server runs Debian’s Testing release. Yes, Testing changes a lot and is not meant for long-term production servers. But I like to be a little more up-to-date on the software packages, and there are times when Debian Stable is too far out of date for what I need or want to run on this server. I do use it as a shell server too. And yes, I know bastion hosts, one “process” per server. That assumes one has a budget for multiple servers.

Anyway, I updated the server, and it pulled PHP 8.1. Previously I was running PHP7.4. Well, something interesting happened during the upgrade. I rebooted the server to get the new kernel loaded, and when everything came back up, I had the “White Page of Death” on the WordPress page. This is a self-hosted server, no CPanel, phpAdmin, or anything like that. If I have to fix a problem, it’s the command line and me.

END_OF_DOCUMENT_TOKEN_TO_BE_REPLACED

As I mentioned in the past, I taught a Graduate level Risk Management and Incident response course. In my first term, I was literally hired three days before the term started. The grad class was new, with no framework or anything else to build off of, and I had to build it on the fly.

So, I went with what I learned in grad school elsewhere, which was the NIST documentation. During my first term teaching the class, I kept telling myself there must be something better. NIST SP 800-53 and the related documents have been around for a while, yet we still see breaches. It builds a framework around an organization, but something is missing. With the frameworks in place, breaches still happen and missing ways to help prioritize objectives.

Driving home after teaching class one night, I heard an interview with Jack Jones talking about Factor Analysis in Information Risk (FAIR). It made sense, and FAIR can tie actual monetary loss to things. So, I got a copy of the book but didn’t change the class in the middle of the term; I just waited for the next term the class was offered (it was only offered once a year).

When going through “Measuring and Managing Information Risk: A FAIR approach” by Jack Freund and Jack Jones, the book mentioned Threat intelligence several times, asking the Threat Intelligence experts, working with threat intelligence vendors, etc. And that part spoke to me too. Using the FAIR framework creates better planning/requirements and direction steps to speak to the threats a company faces.

In FAIR, threats don’t mean all the uses that we have in IT/Cyber Security, which boils down to speaking to an adverse event or action when something is exploited or compromised. In FAIR, a Threat is someone or something that can take independent action against an asset in a way that changes value. That made sense, too;  it gave better, tighter definitions to work with.

And while staring at the FAIR Framework, I came up with the below image. It is a modified version of the framework applied to areas of influence I see belonging in whole or in part to Threat Intelligence / Cyber Threat Intelligence showing the highlighted sections: 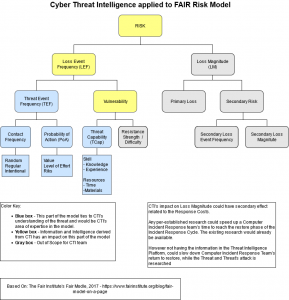 I’ll walk through the different parts and how I see Threat Intelligence’s role in each in future posts. They’re probably going to be mixed in with other things, but I’ll have a link page like I did the Building an OSINT box series that links to each part in order.

I’m getting ready for a fun little project with a friend. Several years ago, while doing my undergrad, I got a copy of Chris Sander’s “Applied Network Security Monitoring.” I was going to do a book study group at school when it came out, but it turns out it was a required text for my Incident Response course.

Sadly, that class was a mess, and I don’t think we used the book in it at all. A different friend and I referenced the book to build a project for one of our other classes. We used it to build several honey pots, with what was supposed to be centralized logging. That, however, failed due to the Data Center we put the logging server in. The DC we picked for the log server didn’t allow logging to that DC for some reason. The other ones through the VPS provider would have worked fine. Just not that one. No clue why. We did complete the project with the honey pots but had to monitor each one instead of having central logs.

Anyway, talking about burnout recently with friend one mentioned above, we both feel burnt out. We don’t want to do anything computer-related after work. Studying, Udemy, Coursera, Hack-in-The-Box, Try Hack Me, scripting, blogging, etc. To get around this, we’re going to work through Applied Network Monitoring, and we’re also going to blog about it.
Before confirming this was the book and project we would do, we asked Chris Sanders via Twitter if the book material was still relevant. He said the concepts would be, but the tools would be different now.

It should be fun.

Once my friend gets his blog set up, I’ll link to it too. And yes, I know I still have some OpenFAIR/CTI/OSINT related content I want to blog about; see the comment about being burnt out above.

In my Passed the Open FAIR Exam post, I mentioned there were some issues with some of the questions on the exam not matching what I studied. Since I wrote the blog post, I printed and did quick reviews of the O-RA v2.0  and the O-RT v3.0.

The questions I remember struggling with did come from the newer versions of the Knowledge Body. So if you’re going to study for the Certification Exam, even though the Certification Page still lists the old documents, you’ll want to study the new standards.

Last year, I took the RiskLens FAIR training course to learn the FAIR-U software before teaching FAIR as the Risk Management part of the graduate-level Risk Management and Incident Response class I taught [*]. The course came with an Open FAIR certification exam voucher. 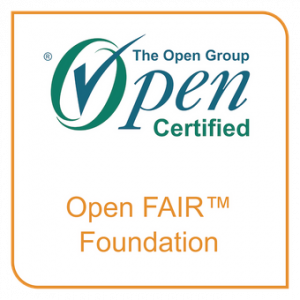 After passing the GOSI in June, I took a few weeks off and started then studying for the Open FAIR certification exam. My study material and method was:

Now there is a new version of both the O-RT and the O-RA that came out this year. But after asking the member team at the FAIR Institute if I should get the new versions in case the test changed, they said I should be okay using the older material.

After taking the exam about six weeks after asking that question, I think I should have studied the new versions, even though the other study material doesn’t appear updated yet. Some of the questions on the exam didn’t make sense, and  I suspect they reflected the change in the new versions of the O-RT and the O-RA. I need to check that, but I wanted a few days of downtime to read other things.

[*] I’m not teaching this term; part-time lectures are used to fill classes that the department doesn’t have Full or Part-Time professors (Ph.D.) for courses. The department has also been hiring more Ph. Ds the last few years, so there are more of them now, meaning they need fewer lectures. It also means I have more free time to work on personal things. While the job says part-time, I spent more time doing class-related administrative work than I did my Full-Time Day Job.

As usual, I have a lot on my plate. So I don’t get to blog as much as I’d like. Then again, I haven’t had a cool project to work on for a while. Just going through skilling up on things. Back in March, I mentioned I took the SANS Security 487 course, Open Source (OSINT) Gathering and Analysis. For the last month or so, I’ve been studying for the exam.

So that’s a thing. Second SANS class taken, second GIAC exam passed. I’d share the embedded link, but it gives too much personal information away. So all that is here is the certification badge they provide. 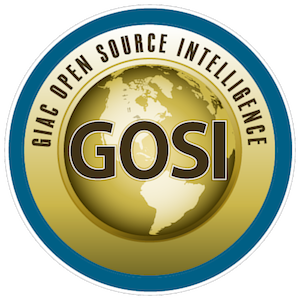 Next up is going to be the Open FAIR certification. I went through the training on my own dime last year, and I’ve been slowly studying for that one since last year. I’m planning to schedule the test for mid-August.

For SANS/GIAC, next on my radar will probably be Sec 504 / GCIH.

After that, I’m still interested in the Python classes. Both Sec 573 Automating Information Security with Python and Sec 537 Practical Open-Source Intelligence (OSINT) Analysis and Automation.

They added a new one for OSINT, and I’m wondering how much overlap with the Automating OSINT by Justin Seitz there is.

I’m also interested in LEG52: Law of Data Security and Investigations and MGT512: Security Leadership Essentials for Managers. Both of those are for personal reasons. But in all the years I’ve been around the industry, I’ve only gotten to go two SANS classes, so it will probably take a while.

When I put my training request in, my manager pointed out I could probably pass the exam without the course. Maybe my manager was right, but I like a good refresher course every once in a while.